About one month I ago, I dashed into a store for a few things.  As I approached the cash registers, I noticed only one register was open with a line of five people in front of me.

I groaned internally because I was due to pick up my son and husband in five minutes.  The store had plenty of associates (six people) stocking the shelves nearby and only one register open!

As three more customers joined the line behind me, I saw one associate, and then another, go into the register area without urgency and then leave again without urgency.  They couldn't have missed the extremely long line of customers waiting to be checked out.  And they didn't seem in any hurry to correct the situation.

I felt impatience welling up in me.  I wondered: should put the items back on the shelves and leave without them? Or should I stay? A voice within me said: STAY.

This went against my rational mind's nagging fearfulness.  "You'll be late, you'll be late," it was chanting and jeering.

Deciding to consciously practice spiritual natural law, I just as quickly let that impatience go, saying to myself, "The Universe will handle this situation.  And I will not be late to pick my family up."  I instantly felt relaxed and I smiled calmly to myself.

One minute later, an associate went to the check out area and slowly opened another cash register and stated in a monotone voice, "I can take the next person in line who is paying cash."

It took me a second to realize that all of the people ahead of me weren't moving to the now OPEN register.  "I am paying cash!" my voice rang out happily.  I was checked out immediately and on my way to my family without a hitch.  Only one other person joined the cash line behind me, and when I left the store ten people were still waiting in the original line.

This is an example of allowing the Universe to handle the situation.  Time was expanded - those five minutes were extended infinitely.  A checkout line opened up almost exclusively for me.  And the best part, I was not late.  It was a wonderful lesson in Allowing the Universe.

Now that it's the Christmas holiday shopping season, I intend to remember this lesson and apply it liberally.
Posted by Willa at 2:51 PM No comments: Links to this post

The issue of non-permanence is something I find fascinating (and sometimes frustrating) in many areas of Life.  After all, nothing stays the same.

One of my favorite examples of non-permanence is the Sand Mandala.

Groups of Tibetan Buddhist Monks have been visiting Lily Dale over the years.  And one of the things they do while they are here is construct a mandala design out of different colors of sand.  Each intricate design is painstakingly created from hours of patient work by the Monks - extremely time-intensive and exacting.  It is a working meditation, a blessing, and a work of art.

I had the opportunity to get a taste of the level of difficulty the construction of the Sand Mandala presents.  Six years ago, they had a small mandala off to the side where we regular Joes & Jills could give it a try.  It was in tribute to the 125th Anniversary year of Lily Dale symbolized by a beautiful swan.  Using long narrow metal ridged cones filled with colored sand, the idea was to tap and rub a stick along the cone's exterior ridges to encourage small amounts of the colored sand to funnel down and sift gently into the design.  It was reminescent of using a long pastry frosting tube but instead of squeezing out too much frosting, I tapped out too much sand - POOF!  Thankfully, I had done it off to the side so I didn't effect the swan design, whew!

Anyway, back to the subject at hand: Non-permanence...  Immediately after the Monks finish creating the Mandala, they do special prayers and ceremony to deconstruct the Mandala.  Yes, you read that correctly - they destroy the art.  All of those beautiful hours and amazing perfection - gone.

The sands are swept up in a specific order and placed in an urn.  Half of the sand is distributed to the audience at the closing ceremony, while the remainder is carried to a nearby body of water, where it is deposited. The waters then carry the healing blessing to the ocean, and from there it spreads throughout the world for planetary healing.

Bottomline:  This mandala exercise is done to as a metaphor of the impermanence of life. To remind oneself of change. To enjoy beauty and the moment of NOW while you have it. To give the best of yourself to each situation no matter the outcome.


Update: I just found a link if you would like to read more about the process of the Sand Mandala:  http://www.mysticalartsoftibet.org/Man-Proc.htm#top
Posted by Willa at 5:02 PM No comments: Links to this post

NDE of nephew brings message of love for client

A client just called me to share something.  She enthusiastically told me that her nephew had almost died about a month ago.  He is almost fully recovered now, but during the event he had a near-death experience (NDE).

During the time the nephew was toe-dipping on the other side, he spoke with her dead husband.  The husband explained that it was not the nephew's time to pass and that he would be returning until the time he was officially called by God.  Also, the husband said that he is happy and doing well on the Other Side, even giving identifiers and information that my client understood as confirmation of his continued existence.

Needless to say, my client was thrilled to have this confirmation from her husband via her nephew.  She said that, while she could have done without the scare of her nephew's situation, she was overjoyed to have this special message of Love from her beloved husband.

Then, she explained that she called me because I am the one person she knows who would understand.  Because of our wonderful readings in the past when I have connected her with her husband, she felt she had to tell me "thank you".

I feel honored that I have been a part of this special communication between a husband and wife.  And I feel happy that she has had confirmation of her husband's continued existence (proof of continuity of Life) from another source.
Posted by Willa at 5:12 PM No comments: Links to this post

My husband called my phone and left a message for me.  I could hear the excitement in his voice, "There are 100 loons on Cassadaga Lake right now.  When you drive past today take a look at them."

Loons? Was my husband talking about some people doing strange things on the lake?

Sure enough, when I ventured out later that day, there were about 100 loons swimming in the lake.  Only to my pleasant surprise, the "loons" my husband referred to were bird loons.  Beautiful black and white patterned birds.  [And because I've finally figured out how to import a picture to my Blog, here you go!] 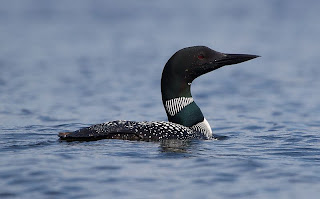 I've heard the call of the loon when visiting the Adirondacks. The bird call of the loon is a haunting trill that echoes across the still water to the tall pines. I look forward to hearing it whenever I visit there.
And now they are practically in my back yard.  I LOVE that they are visiting my part of New York state!  I accept their presence as a blessing and remain open to their message.
Posted by Willa at 5:34 PM No comments: Links to this post

Have you heard about what rabbits did in Australia?

In 1859 [that's over 151 years ago], a man named Thomas Austin moved to Australia and made the astounding discovery that the Land Down Under didn't have a native rabbit population.  This was especially distressing to him because when he lived in Englad he was an avid hunter, regularly dedicating his weekends to rabbit hunting.

So Austin asked his nephew in England to send him 12 grey rabbits and five hares so that he could continue his hobby in Australia by creating a local population of the species. At the time he had stated, "The introduction of a few rabbits could do little harm and might provide a touch of home, in addition to a spot of hunting."  However, when the nephew could not source enough grey rabbits to meet his uncle's order, he topped it off by buying domestic rabbits.

One theory as to why the Barwon park rabbits adapted so well to Australia is that the hybrid rabbits that resulted from the interbreeding of the two distinct types were particularly hardy and virile. Also, many other farms released their rabbits into the wild after Austin.
It is the nature of rabbits to reproduce extremely quickly, so they spread rapidly across the southern parts of the country. With mild winters, Australia has the ideal conditions for a rabbit population explosion because the rabbits were able to breed the entire year. And Australia's vast areas with low vegetations create an ideal habitat for rabbits.

Within ten years of their introduction in 1859, rabbits had become so prevalent that two million could be shot or trapped annually without having any noticeable effect on the population. It was the fastest spread ever recorded of any mammal anywhere in the world.

This is a classic example of unintended consequences!!!

Our thoughts can also breed like rabbits.  One negative thought can become two then become twenty until you are overrun by 100 scared-rabbit thoughts hopping around in your head.  As humans we are blessed with creative minds --- when left untrained, our minds revert to ego-based fears.

In those fear-driven moments, you rationalize that you are just being realistic, just preparing for the eventuality of "what could happen".  Your fears tunnel and burrow into your consciousness, leaving you riddled with panic and limiting your happiness.  This is one of the fastest ways to become frantic and shut out your Good.  Do not allow erroneous thoughts to run rampant.  Give those feelings of fear over to God.  There is no way that you can absolutely say that the feared outcome will result.  Are your feelings an excuse to continue hiding from your potential?  Focus on having no excuses and discover the deeper feelings of Truth.

Bottomline:  When you know a fear to be groundless, don't toy with it, don't indulge it.  Think of other matters.  Breathe steadily.  Relax.  As you attune to the presence of your Higher Self, you walk courageously forward.
Posted by Willa at 7:19 AM No comments: Links to this post